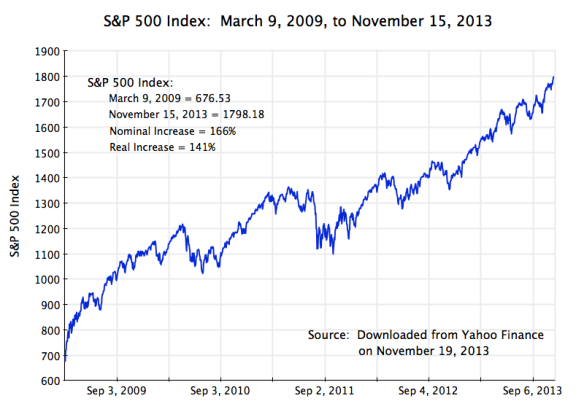 Equity prices reached record levels on November 18, with the S&P 500 index hitting 1,800 in mid-day trading and the Dow Jones Industrial Average hitting 16,000, before both closed lower.  While any such index numbers are arbitrary, it might be timely for a brief update of a blog post from March of this year on the boom in equity prices, to see where things now stand.  That blog post noted that equity prices have boomed under Obama, to the extent that the stock market rally that began soon after he took office has been one of the largest of the last seven decades.

Since March, that rally in equity prices has continued.  The graph at the top of this post shows the path for the S&P 500 stock market index (a capitalization-weighted index that is generally taken as the benchmark for the market), from its trough on March 9, 2009, to its most recent peak (in terms of its daily closing price) on November 15.  It has now increased by 166% in nominal terms, and by 141% in real terms, since that low-point just six weeks after Obama was inaugurated.

The table above fits the on-going rally into all the bull market rallies since 1940.  These rallies are defined as increases in equity prices of 25% or more in nominal terms before ending with a correction of 20% or more.  The calculations are based on figures originally provided by Barry Ritholtz on his web site (which were in turn based on Merrill-Lynch figures), which were used in my March blog post.

There have been 11 such rallies since 1940, and the Obama market rally is now the fourth largest among these.  Since it is still on-going, it could also move up further in rank.  And the pace of the increase has been rapid.  The real rate of growth in equity prices over the course of this rally (of 21% per annum up to this point) is the third highest of any of these rallies.

Conservatives continue to charge that Obama’s policies have been terrible for business and for the economy.  Yet if that were true, one would not expect equity prices to be booming.  I should hasten to add that this rally could, of course, end tomorrow.  Stock market rallies always come to an end.  But until it does, it is hard to reconcile the view of conservatives that Obama has been bad for business with what we see happening in the markets.