This was not due to older individuals being more likely to get the disease in the first place.  As we will see below, the distribution of those coming down with Covid-19 is broadly similar to the distribution of population shares, and for those 50 and older, the share of this age group of all those who came down with the disease is almost identical to their population share.  Rather, the cause is that when an older individual comes down with the disease they are far more likely to die from it.

This short post will review the figures, basically through a series of charts.

The chart at the top of this post shows the shares of those who died from Covid-19 in the US by each age group (where the sum across age groups will be 100%).  These are based on totals since the start of the pandemic in February 2020.  The data comes from the CDC, which now reports on this each day.  Deaths and the causes of those deaths are regularly reported to the CDC by the US health system, and while reports with details on age and similar information will lag (the totals in these CDC figures come only to 71% of the total number of deaths from Covid-19 that the CDC also reports), for these share estimates the partial figures will be fine.

The CDC numbers on confirmed cases of Covid-19 by the same age groups are:

Note the scale, where those aged 50 and older made up just 35% of all those who had a confirmed case of Covid-19.  This is far from the 95% of deaths from the disease.

The shares of individual age groups varied, but this is not surprising as the share of the population of the US by each such age group also varies widely.  The interesting question is whether the shares of those coming down with the disease were different from the population shares.

This chart shows the ratio of confirmed cases of Covid-19 of each age group to the share of the US population of that age group (using Census Bureau numbers).  By definition, that ratio will be 1.0 for the population as a whole.  Interestingly, for those age 50 and older, the ratio is very close to 1.0.  That is, those 50 and older accounted for 35% of cases in the US of Covid-19, and they similarly account for about 36% of the US population.  In practice, at least, they were only as likely to pick up the disease as their overall population share.

For the other individual age groups the ratio varies by about +/- 20 to 30% around equal shares (a ratio of 1.0), and there might be some simple explanations for that variation.  The ratio is about 0.8 for those between the ages of 65 and 84, where this might be because most of those in this age bracket are retired and can isolate themselves from much exposure to others.  In contrast, a significant share of those aged 85 and older might reside in nursing homes or may otherwise need assistance, thus exposing themselves to others.  The ratio for that age group is 1.2.

The ratios are also above 1.0 for those of working age below age 50, as many in these age groups will work and this may necessitate exposure to others.  Finally, the far lower ratios for children through to age 17 might well be anomalies due to limited testing.  Those in these age groups are far less likely to die (as we will discuss immediately below), and will often also show only limited symptoms should they get the disease (and may indeed often be totally asymptomatic).  As a result, many in those age groups may have not been tested even if they had the disease, as they did not exhibit symptoms.  The young may still get the disease, and indeed often do, and it may be a devastating disease for a significant number of them.  But the shares appear to be well less than for other age groups.

Broadly, therefore, the distribution of confirmed cases of Covid-19 by age group is similar to the population share of that age group (with the possible exception of those age 17 and below, although this may be a testing issue).  The data suggest that if one is exposed to the virus then similar shares of the population, regardless of age, get the disease.  Certain age groups, and in particular the elderly, do not appear to be more susceptible than others.

Why then do the elderly account for the overwhelming share (95% by those age 50 and above) of those who have died from Covid-19?  It is because it is far more deadly for them should they get it: 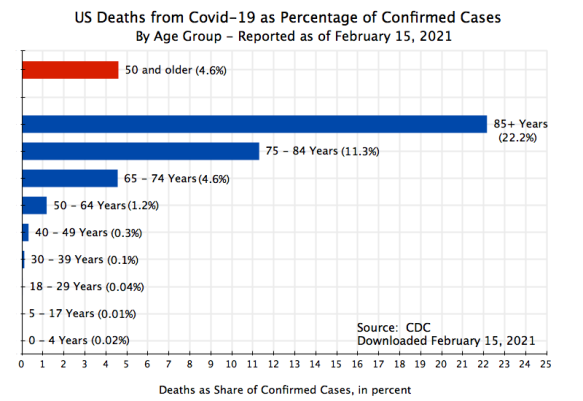 More than one in five (22%) of those aged 85 and older die from Covid-19 should they come down with the disease.  This is incredibly high for a communicable disease.  But the mortality rates then fall steadily for younger age groups.  It is still high at more than one in ten (11%) of those between ages 75 and 84, and about 5% for those between 65 and 74.  But it then falls to just 0.01% for those between 5 and 17, and 0.02% for those 0 to 4 (and with wider testing, leading to a higher number of confirmed cases, it might in fact be less than this).  Put another way, the mortality rate from Covid-19 is 2,000 times higher for those aged 85 and older than it is for the young.

These figures provide the rationale for prioritizing the elderly in the distribution of vaccinations.  Once one is able to vaccinate the 36% of the population aged 50 and above, one would have vaccinated the age groups accounting for 95% of the deaths from Covid-19.  The similar figures for those aged 65 and above are that they make up 16.5% of the US population (54 million people), but account for 81% of Covid-19 deaths.  And as I write this (on February 16), the CDC reports that 55 million doses of the vaccine have so far been administered in the US, with almost 40 million having received at least the first dose (and 15 million the second dose as well).

The prioritization of the elderly makes sense.  Covid-19 appears to spread similarly across age groups, but mortality from it is concentrated to a shockingly high degree among those who are older.