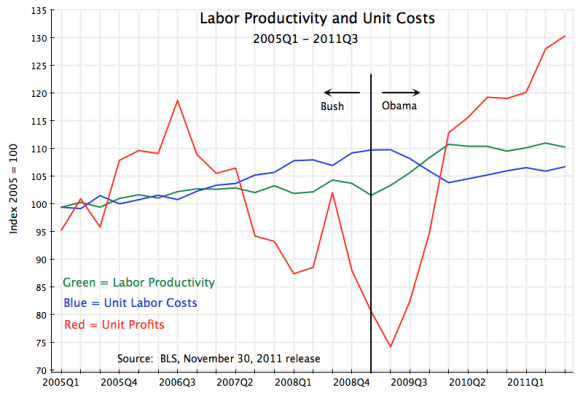 The Republican Presidential candidates, and especially Mitt Romney, have repeatedly asserted that burdensome regulations imposed by the Obama Administration are to blame for the disappointing performance of the economy during the recovery, and especially the disappointing job performance.  The evidence points to the opposite:  productivity has in fact performed quite well and profitability has sky-rocketed.  If regulations were a problem, one would have expected productivity to have declined and profitability to have suffered, and they haven’t.

The disappointing performance of the economy in recent years can rather be attributed to slow growth in aggregate demand.  Households have had to scale back consumption after the housing bubble burst, while conservative fiscal policies forced by a Republican Congress have not allowed government expenditures to fill in the resulting gap.

The chart above shows how labor productivity, unit labor costs, and unit profits have performed in recent years (for non-financial corporations), each indexed so that the 2005 average equals 100.  Labor productivity (in green in the chart) is the amount of output produced per unit of labor.  It was basically flat prior to Obama taking office, rising by just 2.2% total in those four years, but then jumped by 8.6% total in the subsequent 2 1/2 years.  If regulations imposed by Obama were a major hindrance, productivity would not have gone up like this.

But while labor productivity improved, labor compensation (not shown in the chart to reduce clutter) was basically flat.  Indeed, hourly wages in real terms have declined slightly since Obama took office (by 0.8% total).  This is consistent with a slack labor market, with high unemployment depressing wages.  With higher productivity and wages not increasing, the result was falling unit labor costs (labor costs per unit of output), as shown in blue in the chart.

What did shoot up after Obama took office was unit profits (profits per unit of output, in red in the chart).  This is much more volatile, but it is interesting to note that it peaked in the third quarter of 2006 and then fell sharply well before Obama took office.  If someone is to be “blamed” for this, it would have to be Bush.  Unit profits then reached its low point in the second quarter of 2009, as the recession came to an end, and then skyrocketed by over 75% up to the third quarter of 2011 (the most recent data available).  This is of course all consistent with what has been observed at the level of the aggregate National Income accounts, which was reviewed in an earlier post (see here) on this blog.

Mitt Romney and the other Republican candidates assert that burdensome regulations under Obama have stifled the ability of business to make a profit, and with that, businesses have been unwilling to employ more workers.  But productivity has improved and profitability has soared.  The evidence simply does not support their assertions.