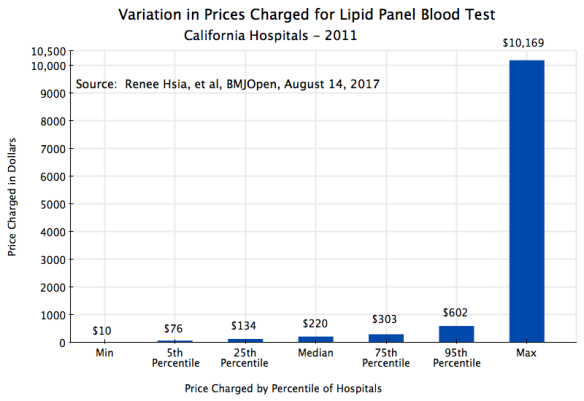 A.  Widely Varying Prices Charged Even for Standard Blood Tests

This post is an addition to an earlier post on this blog that looked at the widely varying prices being charged in the US for common health procedures.  As that post noted, such differences in prices for what are fundamentally the same services are a clear indication that the market is not working.  The prices would be similar if the market was working, with differences that are relatively small and explainable by factors such as geography.  But that is not the case.

That post looked at data from a number of studies (including my own simple research on the prices that I would be charged in the Washington, DC, area, for a common surgical procedure).  Prices could vary by a factor of 10, and indeed often even more.  And as that post showed in a series of charts, the prices actually paid in the US (at the rates negotiated by insurers) are not only widely varying, but also consistently far higher than the prices paid for the same procedures in other countries.

A criticism of studies that examine the prices being charged for health care procedures is that individual cases can differ, with some more complex than others.  Thus prices might vary for that reason.  Even though it is difficult to see how costs can vary by a factor of ten or more even with differing levels of complexity for some standard procedure (such as a hip or knee replacement, for example), one can recognize that differing degrees of complexity might explain at least some of the price differences.

Thus a study published last week in the BMJOpen, an open-access on-line journal affiliated with the British Medical Journal, is of interest as it addresses the question of whether such price variation is found also for procedures where case complexity does not enter.  The lead author is Dr. Renee Hsia, of the Department of Emergency Medicine at the University of California – San Francisco.  In an earlier study, summarized in the blog post cited above on health care price variation, Dr. Hsia had looked at the prices charged by hospitals in California for an uncomplicated but urgent appendectomy.  She found that the prices varied by a factor of 120, between the lowest rate charged and the highest.

In the current study, Dr. Hsia with her colleagues looked at the prices charged by California hospitals for ten common blood tests.  The prices reviewed are the so-called “chargemaster” rates, or the list prices at the hospitals for the tests.  The actual price paid will then normally be a lower rate negotiated with the hospital by your insurer (if you have insurance), but the chargemaster rate is the starting point.  Why this matters will be discussed below.

Dr. Hsia was able to obtain the data for California because hospitals there are required to report to state authorities the average prices they charged for a number of common procedures.  Since routine blood tests are standard, and are not more or less complicated for one patient vs. another (the blood is drawn, brought to a standard machine, and the results then read), one cannot argue that the price variation observed might be a consequence of different degrees of case complexity.

The results from one of the blood tests examined, that of a standard lipid test (which measures blood cholesterol levels), is shown graphically at the top of this post.  Data was available from 178 hospitals, and each hospital reported the average price it charged for this test over the course of 2011.  The price charged at one hospital was only $10 per test.  The average price charged at a different hospital, for the exact same blood test, was $10,169 per test, or over 1,000 times as much.  Such variation is absurd.

These are, of course, the extremes.  But even if one focusses on observations in the middle of the distribution, it is impossible to see how such variation in prices charged can be justified.  The price at the 5th percentile (meaning 5% of the hospitals charged this price or less) was $76.  The price charged at the 95th percentile (meaning 5% charged this price or more) was $602.  This is almost 8 times higher than the price at the 5th percentile.  The results for the other nine blood tests examined were broadly similar (with ratios between the prices at the 95th and 5th percentiles varying from a high of 12 times and a low of 6.8 times).

What can justify such a spread?  Nothing that I can see.  The tests are standard, use standard machines, and all use similarly drawn blood.  The response of a spokeswoman for the California Hospital Association was that the prices reviewed in the study are “meaningless”, since virtually no one (she states) pay these rates.  As noted above, the rates reviewed in the study, as in the earlier study of the prices charged for appendectomies, are the chargemaster rates of the hospitals.  These are the regular list prices for the procedures, which are then typically discounted in negotiations with individual insurers.

But there are still several problems with this, including:

1)  How much the prices are negotiated down will vary according to the bargaining strength of the patient’s individual insurer in the region.  In the bargaining process discussed in an earlier post in this series on health reform, insurers will bargain with hospitals on what the rates will be.  Their relative bargaining strength will depend on how concentrated the local market is in terms of hospitals (if there is only one hospital, or one chain of hospitals all owned by the same entity, but a number of insurers, the bargaining power of the hospital will be great) versus insurers (in one insurer dominates in the market, while there are many hospitals, that insurer will have great bargaining power).  If you have insurance with an insurer who does not command great market share in the region, the price you will have to pay may be close to the chargemaster rate.

3)  You may well have insurance, but if the particular hospital you are in is not in your insurance network (perhaps because you were brought by an ambulance to the nearest hospital in an emergency), you will be charged the chargemaster rate.  Your insurance company might pay a portion of this at what they consider to be a “reasonable rate”, but this is likely to be close to what your insurer has negotiated with others, and as we have discussed in the earlier blog posts cited above, this might be only one-tenth of the chargemaster rate.  You will then still be responsible for the other 90%.  This can be a lot, if you are at the hospital where a simple lipid panel blood test is charged at over $10,000.

4)  You may well again have insurance, and be in a facility that is in-network for your insurer, but your insurer might disagree on whether some standard blood or other test ordered by your doctor was really needed.  Your insurer will then refuse to cover the cost of that test, and you will be charged the chargemaster rate.

I am personally facing a case of that right now.  While the amounts are small in absolute terms, the issue is the same.  My doctor ordered a set of routine blood tests for me earlier this year, and my insurer covered all except one.  For that one, the insurer asserted that there had not been a need (even though both my doctor, and research I found on the web, made clear that the test was in fact needed).  The lab therefore charged me the full chargemaster rate (which in this case was $213.98), even though the negotiated rate Aetna would have paid, had they agreed it should be covered, was only $16.23.  That is, the full billed rate was 13.2 times the negotiated rate.  I would have been glad to pay the negotiated rate in full, and the $16.23 the lab has negotiated with Aetna is evidently a rate sufficient to provide an adequate profit to the lab.  But find it absurd that I should have to pay over 13 times more.  I am appealing, but do not know yet the outcome.

5)  Finally, it is worth noting that the chargemaster rates can matter for other issues as well. For example, hospitals are typically required to provide a certain amount of “charity care” (care provided to the poor without health insurance for free or at discounted rates) in order to benefit from certain tax breaks.  This is especially important and valuable for private, profit-making, hospitals.  Valuing such services at the chargemaster rates, when these rates are 1000 times higher than what someone else might charge, will make it look as if the hospital is providing a good deal of charity care.

This new study should put to rest the argument that price variation in health care services is principally due to variation in the degree of complexity of individual cases.  Common blood tests are standard, and they show price variation which is huge as well as similar in degree to that seen for standard health care procedures (see the review in the earlier post).  The prices vary not principally due to case complexity, but rather due to a grossly misfunctioning market for health care services, where there are strong forces keeping out effective competition and any pressure to converge on low prices from efficient providers.