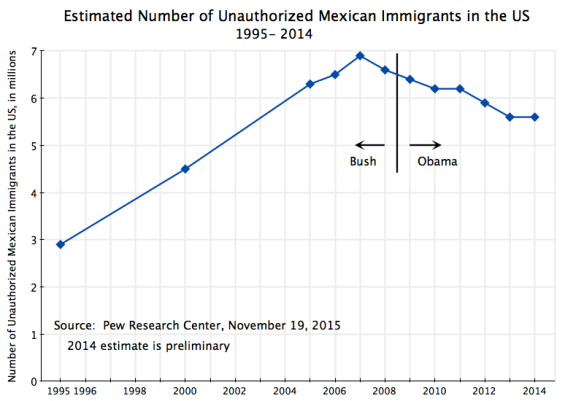 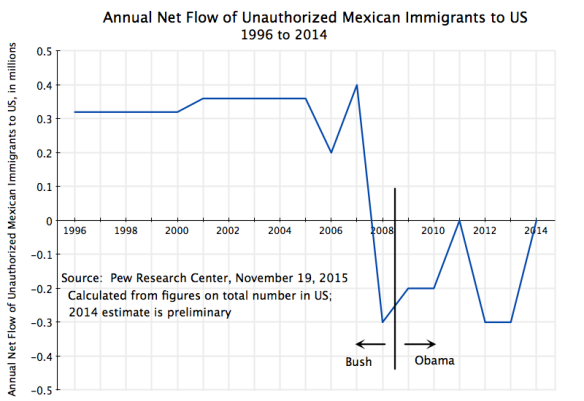 In the heated rhetoric of the current Republican presidential campaign, one would think that the US is being flooded by illegal immigrants from Mexico, slipping through a porous border with President Obama unwilling to do anything about it.  Calls are being made for a bigger, taller, and longer wall, more aggressive policing of the border, and the forced deportation of those who are already living here.  These calls have been a centerpiece of Donald Trump’s campaign from the day he announced his candidacy (when he asserted Mexico is “sending” criminals, drug pushers, and rapists to the US).  More recently, in the November 10 Republican presidential debate and in more detail in the days after, Trump called for the creation of a new special police force, a “massive deportation force”, which would aggressively pursue and deport those in the US who were believed to be illegal. Yet Trump has for some time now been at the top of polls of Republicans as their choice for president.

But what are the facts?  The US is actually not being flooded by illegal immigrants from Mexico. Nor has the supposed “problem” become far worse under President Obama.  The Pew Research Center released on November 19 a report with careful estimates of the number of unauthorized immigrants from Mexico residing in the US.  The report brings up to date figures the Pew Center had released previously for earlier years.

The chart at the top of this post is a replication of the chart presented as Figure 5 in Chapter 1 of their report, with figures on the estimated total number of unauthorized Mexican immigrants resident in the US by year.  The second chart is then simply the net annual flows as calculated from the numbers on the totals in the first chart (the change from one year to the next).  It should be noted that Pew Center presented estimates only for 1995, 2000, and 2005, before going to annual figures.  Hence the figures on net flows for 1996 to 2000 and 2001 to 2005 assume equal annual changes.

The Pew Center estimates that the number of unauthorized Mexican immigrants resident in the US reached a peak in 2007, and has since fallen substantially.  The falls in 2008 and 2009 can probably be attributed mostly to the severe downturn in the US in those years, when jobs were scarce and more Mexicans immigrants chose to return to Mexico than come to the US.  However, it is significant that as the US labor market has strengthened since 2009, with the unemployment rate hitting just 5.0% recently, the net outflow of Mexican immigrants continued.  In each and every year of the Obama administration there has either been a net outflow, or no net change, in the number of unauthorized Mexican immigrants in the US.

There are many reasons for this, including stepped up and more effective border enforcement as well as more deportations.  The Pew Report provides a good review of the factors, and I will not go into them all.  But one fact to note is that in FY2013, with Obama as president, the number of deportations reached a record high of 315,000, an increase of 86% from the level in 2005.

One may debate what the appropriate policy should be.  In my view, while immigration has been controversial throughout US history, the US has always also always benefited from it. Recall the discrimination against Catholic immigrants from Ireland in the early and mid-1800s, and yet how such immigration developed into an important part of what made the US what it is now.  There is little reason to believe that this time is different.

But regardless of whatever one’s policy views are, one should start with the facts.  And it is clear that the Republican candidates for president do not have these straight.