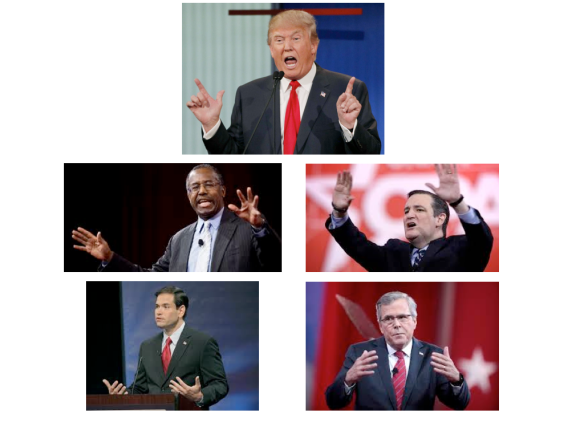 The lead article on the front page of today’s Washington Post reported on what several of the Republican presidential candidates have said they would do in the face of refugees fleeing the war in Syria, and on Muslims (including US citizens) already resident in the US. David Farenthold and Jose DelReal were the authors.  While I do not normally put up posts on this blog that simply summarize other news reports, this article was especially telling. Those who did not see the article should find it of interest.

The first three paragraphs (where I have inserted the name of the candidate being referred to in parentheses; the article identifies them later) are:

One of the front-runners in the Republican presidential race [Donald Trump] said Thursday he would “absolutely” want a database of Muslims in the country and wouldn’t rule out giving them special ID cards that noted their religion.

Another top candidate [Ben Carson] likened Syrian refugees — who are largely Muslim — to dogs. Some of them might be rabid, he said, which was reason to keep them all out.

And a third [Ted Cruz] stood up in the Senate on Thursday and called for banning refugees from five Middle Eastern countries. He was explicit that the point was to keep Muslim refugees out while letting Christians from the same places in.

Donald Trump, who has suggested closing down mosques and increasing surveillance of Muslims, said in an interview with Yahoo News published online Thursday that “we’re going to have to do certain things that were frankly unthinkable a year ago.”

Later Thursday, Trump told NBC News that he would “certainly” and “absolutely” create a database of Muslims in the United States, although it was unclear whether this system would track only newcomers to the country or all Muslims living in the country.

Later in the article:

Sen. Marco Rubio (Fla.) said the attacks were part of a “clash of civilizations” — essentially casting the Paris attackers as products of Muslim society rather than a radical group apart from it.

And finally Jeb Bush (along with Ted Cruz again):

Two other candidates — Sen. Ted Cruz (Tex.) and former Florida governor Jeb Bush — suggested this week that the United States should accept Christian refugees from Syria but not some or all of the Muslim refugees.

This is scary.  Perhaps the statements were not fully thought through.  We will see whether and to what extent the candidates seek to “walk back” the statements in the coming days. But these gut reactions (if that is indeed what they are) to the tragedy in Paris, on the treatment of those whose religion is Islam, and how they see refugees from the Syrian war, should at a minimum make us wonder how they would respond if they were faced by a major crisis as president.