A.  How Fast is GDP Growing?

The Bureau of Economic Analysis released today its first estimate (what it calls it’s Advance Estimate) for the growth of GDP and its components for the third quarter of 2019.  Most of it looked basically as one would expect, with an estimate of real GDP growth of 1.9% in the quarter, or about the same as the 2.0% growth rate of the second quarter.  There has been a continued slowdown in private investment (which I will discuss below), but this has been offset by an expansion in government spending under Trump, coupled with steady growth in personal consumption expenditures (as one would expect with an economy now at full employment).

But there was a surprise on the last page of the report, in Appendix Table A.  This table provides growth rates of some miscellaneous aggregates that contribute to GDP growth, as well as their contribution to overall GDP growth.  One line shown is for “motor vehicle output”.  What is surprising is that the growth rate shown, at an annualized rate, is an astounding 32.6%!  The table also indicates that real GDP excluding motor vehicle output would have grown at just 1.2% in the quarter.  (I get 1.14% using the underlying, non-rounded, numbers, but these are close.)  The difference is shown in the chart above.

Some points should be noted.  While all these figures provided by the BEA are shown at annualized growth rates, one needs to keep in mind that the underlying figures are for growth in just one quarter.  Hence the quarterly growth will be roughly one-quarter of the annual rate, plus the effects of compounding.  For the motor vehicle output numbers, the estimated growth in the quarter was 7.3%, which if compounded over four quarters would yield the 32.6% annualized rate.  One should also note that the quarterly output figures of this sector are quite volatile historically, and while there has not been a change as large as the 32.6% since 2009/10 (at the time of the economic downturn and recovery) there have been a few quarters when it was in the 20s.

But what appears especially odd, but also possibly interesting to those trying to understand how the GDP accounts are estimated, is why there should have been such a tremendously high growth in the sector, of 32.6%, when the workers at General Motors were on strike for half of September (starting on September 15).  GM is the largest car manufacturer in the US, its production plummeted during the strike, yet the GDP figures indicate that motor vehicle output not only soared in the quarter, but by itself raised overall GDP growth to 1.9% from a 1.2% rate had the sector been flat.

This is now speculation on my part, but I suspect the reason stems from the warning the BEA regularly provides that the initial GDP estimates that are issued just one month after the end of the quarter being covered, really are preliminary and partial.  The BEA receives data on the economy from numerous sources, and a substantial share of that data is incomplete just one month following the end of a quarter.  For motor vehicle production, I would not be surprised if the BEA might only be receiving data for two months (July and August in this case), in time for this initial estimate.  They would then estimate the third month based on past patterns and seasonality.

But because of the strike, past patterns will be misleading.  Production at GM may have been ramped up in July and August in anticipation of the strike, and a mechanical extrapolation of this into September, while normally fine, might have been especially misleading this time.

I stress that this is speculation on my part.  Revised estimates of GDP growth in the third quarter, based on more complete data, will be issued in late November and then again, with even more data, in late December.  We will see what these estimates say.  I would not be surprised if the growth figure for GDP is revised substantially downwards.

The figures released by the BEA today also include its estimates for private fixed investment.  The nonresidential portion of this is basically business investment, and it is interesting to track what it has been doing over the last few years.  The argument made for the Trump/Republican tax cuts pushed through Congress in December 2017 were that they would spur business investment.  Corporate profit taxes were basically cut in half.

But the figures show no spur in business investment following their taxes being slashed.  Nonresidential private fixed investment was growing at a relatively high rate already in the fourth quarter of 2017 (similar to rates seen between mid-2013 and mid-2014, and there even was growth of 11.2% in the second quarter of 2014).  This continued through the first half of 2018.  But growth since has fallen steadily, and is now even negative, with a decline of 3.0% in the third quarter of 2019: 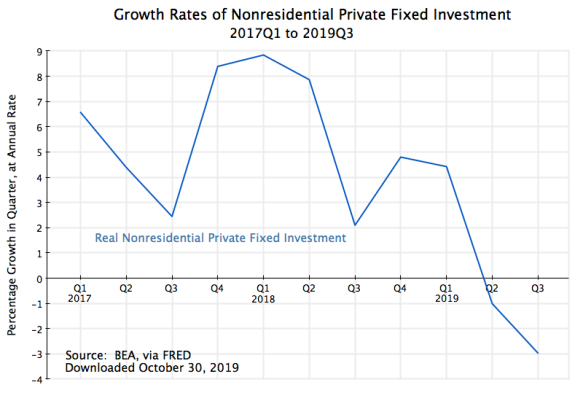 There is no indication here that slashing corporate profit taxes (and other business taxes) led to greater business investment.