The economic downturn this year has been unprecedented in many ways.  Millions were laid off in March and April as the country desperately went into lockdowns to limit the spread of the virus that causes Covid-19, following the failure of the Trump administration to recognize the extent of the crisis.  But it was always known that those lockdowns would be temporary (albeit with differing views on how long they would be needed), and hence those laid off in March and April were generally put on temporary layoff.

The number on temporary layoff then started to decline in May, with this continuing (although at a diminishing rate) through November.  This has brought down the headline figure on total unemployment – the figure most people focus on – from 14.7% in April to 6.7% as of November.  But while that focus on the overall rate of unemployment is normally appropriate (as the number on temporary layoff has usually been steady and low, while the labor force has fluctuated little), the unusual conditions of the downturn this year have masked important aspects of the story.  Unemployment is a good deal worse than the traditional measures appear to suggest.

One key issue is what happened to those who were unemployed but not on temporary layoff.  The Bureau of Labor Statistics (the source of the data used here) defines those on temporary layoff to be those who are unemployed but who either have been given a date for when they will be able to return to their job, or expect to return to it within six months.  All other unemployed (defined by the BLS as being in the labor force but not employed, not on temporary layoff, and have taken concrete actions within the previous four weeks to look for a job), include those who were permanently laid off, who completed some temporary job, who left a job by choice (quit), or have newly entered (or re-entered) the labor force actively seeking a job but do not yet have a job.

That distinction – treating separately the unemployed on temporary layoff and the rest – will be examined in this post.  Also important to the story is how many are counted in the official statistics to be in the labor force at all, as that has also changed in this unprecedented downturn.  That will be examined as well.

B.  The Unemployed on Temporary Layoff Spiked Up and Then Came Back Down, but Other Unemployed Rose Steadily

The chart at the top of this post shows the unemployment rates (as a percent of the labor force) for all who were unemployed (in black), for those on temporary layoff (in blue), and for all others who were unemployed (in red).  Unemployment surged, at an unprecedented rate, in March and April of this year.  The increase in those on temporary layoff accounted for this – indeed for all of this in those months in the estimated figures.  The total increase in unemployment in March and April compared to February was 17.25 million; the increase in those on temporary layoff was almost exactly the same at 17.26 million.  (But keep in mind that these figures are estimates based on household surveys, and thus that there will be statistical noise.  That the numbers were almost exactly the same was certainly in part a coincidence.  Still, they were definitely close.)

The total unemployment rate then came down sharply from its April peak of 14.7% to 6.7% as of November.  It was led, once again. by changes in those on temporary layoff, but this time the number unemployed for reasons other than temporary layoff rose.  Their rate was 3.0% in February, which then rose to 5.0% by September.  It has kept at roughly this rate since (although so far with data for only two more months).

That increase – of 2.0% points – is significant but modest.  With all the disruption this year, one might have expected to see more.  Certainly important and effective in partially alleviating the crisis was the $3.1 trillion in several packages approved by Congress in March and April (of new government spending, tax cuts, and new loan facilities).  While adding to the public debt, such spending is needed when confronted with a crisis such as this.  The time to reduce the fiscal deficit would have been when the economy was at full employment.  But Trump added to the fiscal deficit in those years (with both higher spending and massive tax cuts) instead of using that opportunity to prepare for when a crisis would necessitate higher spending.

C.  But the Number in the Labor Force Also Fell, Which Had a Significant Impact on the Reported Unemployment Rates

There is, however, another factor important to the understanding of why the unemployment rate (for those other than on temporary layoff) rose only by this modest amount.  And that is that the number in the labor force abruptly changed.  This was another unusual development in this unprecedented crisis.

The labor force (formally the civilian labor force, as those on active military duty are excluded) changes only slowly.  It is driven primarily by demographic factors, coupled with long-term decisions such as when to retire, whether to attend college rather than seek a job, whether both spouses in a married couple will seek to work or whether one (usually in this society the wife) will choose to remain at home with the children, and so on.

But it was different in this crisis: 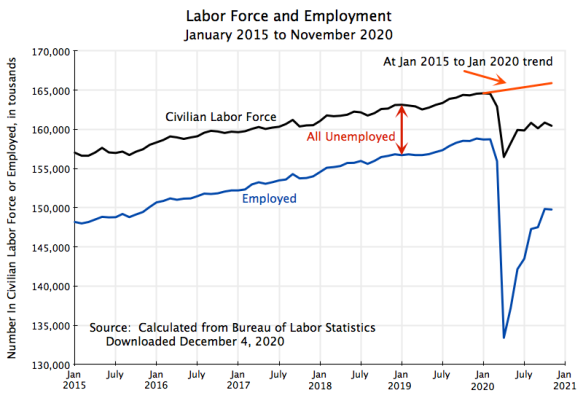 The number in the labor force fell abruptly in March and April – by 8.1 million compared to February, or 4.9% of the labor force.  There has never before been such an abrupt fall, at least since 1948 when such data first began to be collected.  The largest previous two-month fall was just 1.0 million, in 1953 when this was 1.6% of the labor force.  (And the month to month “squiggles” seen in the chart above should not be taken too seriously.  They likely reflect statistical noise in the household surveys.)

Those who drop out of the labor force are not counted as unemployed, as formally defined by the BLS, as they are not actively seeking a job.  And the sharp collapse in available jobs in March and April probably contributed to some dropping out of the labor force, as that scarcity of jobs would, by itself, induce some not even to try to find a job if they lost one.  But probably more important in this unprecedented crisis is a parent (and usually the wife) dropping out of the labor force in order to take care of their children when the schools and/or daycare centers closed.  This has never happened before.

Counting such individuals as among those who are in fact unemployed, the labor market does not look to be nearly as strong as the headline figures would suggest.  Assuming that the labor force in 2020 would have continued to grow at the trend rate of the previous several years, that the number employed would have been the same as was recorded, and that the number on temporary layoff would have also been as recorded, the chart on unemployment rates then becomes: 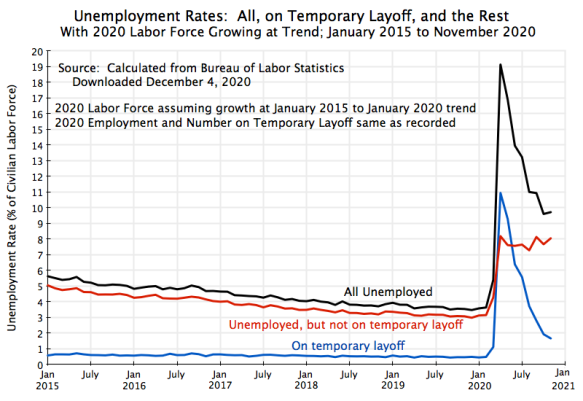 Superficially, this chart may appear similar to that at the top of this post.  But there are two important differences.  First, note the scale is different.  Instead of peaking in April at an overall unemployment rate of 14.7%, the unemployment rate would instead have reached over 19%.  Furthermore, it would still be at 9.7% as of November, which is high.  It is not far from the peak 10.0% rate reached in 2009 following the 2008 economic collapse.

Second, both the path and the levels of the unemployment rate for those other than on temporary layoff are now quite different.  That rate jumps abruptly in March and April to 8.2% of the labor force, from 3.1% before, and then remains at around 7 1/2 to 8% since then.  This a much more worrisome level than was seen above when no correction was made for what has happened to the labor force this year.  There is also no downward trend.  All the gains in the reduction of overall employment since April would have been due to the reduction in those on temporary layoff.

The economy remains weak.  And president-elect Joe Biden is certainly correct that a necessary (although not sufficient) condition for the economy to recover fully will be that Covid-19 be addressed.  Australia, New Zealand, and the countries of East Asia have shown that this can be done, and how it could have been done.  Simply wearing masks would have been central.  Dr. Robert Redfield, the head of the CDC, has noted that wearing a mask could very well be more effective in stopping the spread of the virus that causes Covid-19 than some of the vaccines now under development, if everyone wore them.  But Trump has been unwilling to call on all Americans, including in particular his supporters, to wear a mask.  Indeed, he has even repeatedly mocked those who choose to wear a mask.

As a longer-term solution, however, vaccinations will be key.  But this also depends on most Americans (probably a minimum of 70 to 80%, but at this point still uncertain) being vaccinated.  Even under the most optimistic of circumstances, constraints on vaccine availability alone means this will not be possible before the summer.  But this also assumes that, once available, 70 to 80% of the population (or whatever the minimum share required will be) will choose to be vaccinated.  Given how the simple wearing of face masks was politicized by Trump (and turned into a signal of whether one supports him or not), plus controversies among some on both the left and the right on vaccinations that pre-dates Trump’s presidency, it is hard to be optimistic that such a vaccination share will soon be reached.

Hopefully a sufficiently large share of the population will at some point have chosen to be vaccinated to end the spread of the virus.  But until that happens, further support to the economy, and not least relief to those most affected by the crisis, needs to be passed by Congress and signed by the president.  The House passed such a measure already last May, but Mitch McConnell, the Republican Majority Leader in the Senate, has so far blocked consideration of anything similar.  As I write this, there appears to be a possibility of some compromise being considered in the Senate, but it remains to be seen if that will happen (and if Trump then will sign it).

It is certainly desperately needed.