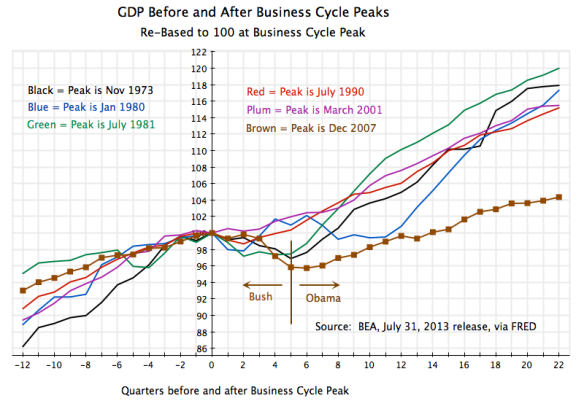 Conservatives have asserted that the recovery has been slow due to huge and unprecedented increases in government spending during Obama’s term, and that the answer should therefore be to cut that spending.  But as has been noted in earlier posts on this blog, direct government spending during Obama’s term has instead been falling.  This reduction in demand for what the economy can produce has slowed the recovery from what it would have been.

This blog will update numbers first presented in a March 2012 post on this blog, which compared the paths of GDP, government spending, and other items in the periods before and after the start of each of the recessions the US has faced since the 1970s.  That earlier blog post looked at the paths of GDP and the other items from 12 quarters before the business cycle peak (as dated by the NBER, the entity that organizes a panel of experts to date economic downturns) to 16 quarters after those peaks (when the downturns by definition begin).  The figures were rebased to equal 100.0 at the business cycle peaks.  We now have an additional year and a half of GDP account data, so it is now possible to extend the paths to 22 quarters from the start of the recent downturn in December 2007.  This has therefore been done for all.

The conclusions from the earlier post unfortunately remain, but are even more clear with the additional year and a half of observations.  GDP growth remains sluggish, government spending has fallen by even more, and residential investment remains depressed (although it has finally begun to recover).

II.  The Path of Real GDP

The graph at the top of this post shows the path followed by real GDP in the periods from 12 quarters before to 22 quarters after the onset dates of each of the recessions the US has faced since the 1970s.  The sluggish recovery from the current downturn is clear.

The economy fell sharply in the final year of the Bush administration, and then stabilized quickly after Obama took office.  GDP then began to grow from the third quarter of 2009 and has continued to grow since.  But the pace of recovery has been slow.  By 22 quarters from the previous business cycle peak, real GDP in the current downturn is only 4% above where it had been at that peak.  At the same point in the other downturns since the 1970s, real GDP was between 15% and 20% above where it had been at the previous peak.  This has been a terrible recovery.

III.  The Path of Government Spending

How has this recovery differed from the others?  To start to understand this, look at the path government spending has taken: 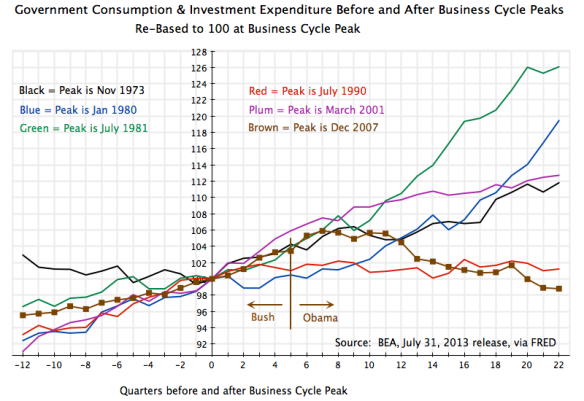 In contrast, in the current downturn direct government spending is now 1.2% below what it had been at the start of the recession in December 2007.  Furthermore, it is worth noting that while it rose in the final year of the Bush presidency and then in the first half year after Obama took office (a major reason why the recovery then began), it has since fallen sharply.  Government spending is now almost 7% below where it had been in mid-2009, a half year after Obama took office.  Such a decline (indeed no decline) has ever happened before, going back at least four decades, as the economy has struggled to recover from a recession.  The closest was during the Clinton years, when government spending was essentially flat (a 1% increase at the same point in the recovery).

IV.  The Path of Residential Investment

The current downturn and recovery also differs from the others by the scale of the housing collapse, and consequent fall in residential investment: 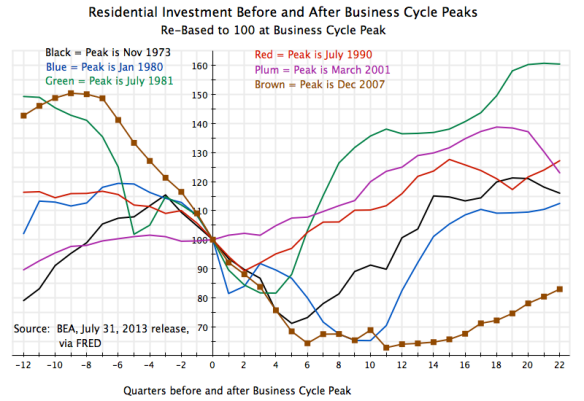 The build up of the housing bubble from 2002 to 2006 was unprecedented in the US, and the collapse then more severe.  As the graph above shows, there has been a start in the recovery of residential investment from the lows it had reached in 2009 / 2010, but it is still far below the levels seen in previous downturns.

Housing had been overbuilt during the bubble in the Bush years, leaving an oversupply of housing once the bubble burst.  And while supply was in excess, demand for housing was reduced due to the severe recession.  As was discussed in an earlier blog post on the housing crisis, the result was a doubling up of households as well as delays in household formation as young adults continued to live with their parents.  Residential investment therefore collapsed, and has recovered only very slowly.

V.  The Path of Household Debt

The housing bubble also led to over-indebtedness of households.  Nothing of this sort at all close to this scale had ever happened before in the US.  With the lack of regulation and oversight of the financial sector during the Bush administration, banks and other financial entities launched and aggressively marketed and sold financial instruments that led to a bidding up of home prices.  But these new financial instruments were only viable if housing prices continued to rise forever.  When the housing bubble burst, widespread defaults followed.  And those households who did not default struggled to pay down the debts they had taken on, for assets now worth less than the size of the debts tied to them.

The result was a sustained fall in household debt (three-quarters of which is mortgage debt) in the period of the downturn: 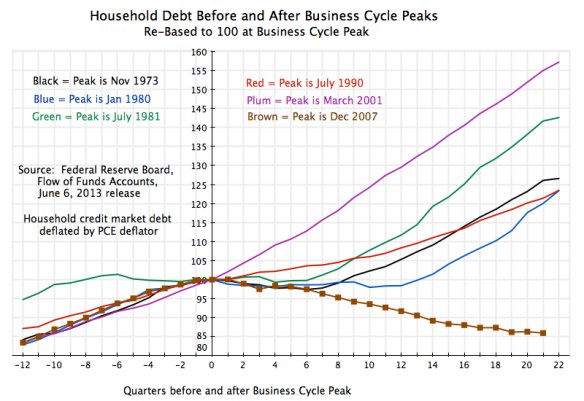 This pay-down of debt had never happened before, and is in stark contrast to the rise in household debt seen in all the other downturns of the last four decades.

Households struggling to pay down their debt have to cut back on their consumption expenditures.  This brings us to the last element of the current recovery I would like to highlight:  the especially slow recovery in household consumption.  That path of consumption during the current downturn stands out again in contrast to the paths followed in the other downturns and recoveries of the last four decades in the US: 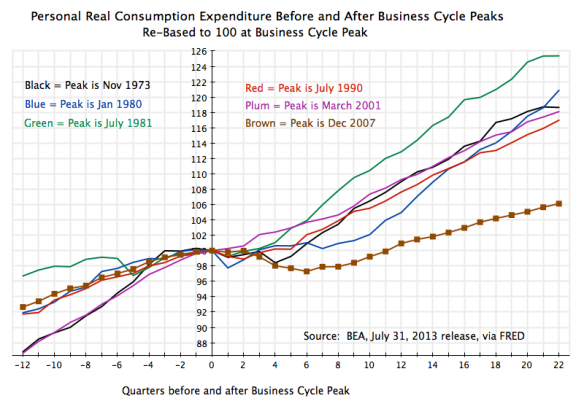 The difference is stark.  Households could spend more in the prior recoveries in part because they could continue to borrow (see the graph on household debt above).  In this recovery, households have instead had to pay down the debts they had accumulated in the housing bubble years, and could increase their household consumption only modestly.

The recovery in the current downturn has been disappointing.  GDP has grown since soon after Obama took office, but has grown only slowly, and has been on a path well below that seen in other recoveries.

There are a number of reasons for this.  Household consumption has kept to a low path as households have struggled to repay the over-indebtedness they had accumulated during the housing bubble years.  Residential investment collapsed as well following the bubble, is only now starting to recover, and remains far below the levels seen at similar points in other recoveries.
And government spending has been allowed to fall during Obama’s term.  This had never happened before in the previous downturns.  Indeed, while real government spending rose by 26% at the same point in the economic recovery during the Reagan presidency, it has been reduced by over 1% in this recovery (and reduced by 7% from what it had been a half year after Obama took office).
The reduction in government spending reduced the demand for what the economy could have produced.  In this it was similar to the reduced demand resulting from lower residential investment or lower household consumption expenditure.  All these reductions in demand reduced GDP, reduced the demand for workers, and hence increased unemployment.  But while residential investment and household consumption can only be influenced indirectly and highly imperfectly by government policy, government has direct control over how much it spends.  That is, government can decide whether to build a road or a school building, and doing so will employ workers and will lead to an increase in GDP.  Hence government spending is a direct instrument that can be used to raise growth and employment, should the government so choose.
Sadly, and in stark contrast to the sharp increase in government spending during the Reagan period that spurred the recovery to the 1981 downturn, US politics during the Obama presidency have instead led to a cut-back in government spending, with a resulting drag on growth.  The disappointing consequences are clear.