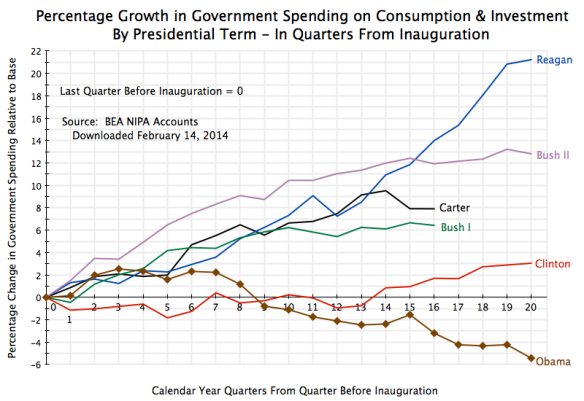 Government spending continues to fall under Obama.  As this blog has noted in earlier posts, the fiscal drag from this reduction in demand for the goods and services that unemployed workers could have been producing can fully explain why the recovery from the 2008 has been so slow.  As another blog post noted, if government spending had merely been allowed to grow under Obama at the same pace as it had historically, the economy would by now be back at full employment.  The public debt to GDP ratio would also be lower, as GDP would be higher.  And if government spending had been allowed to grow as it had under Reagan, we would likely have returned to full employment by 2011.

Fiscal drag is therefore important.  Yet it is still not yet commonly recognized that government spending has been falling in real absolute terms for the last several years (and even more so when measured as a share of GDP).  Earlier blog posts have reviewed this.  The trends have unfortunately continued and indeed strengthened over the last year.  Whether this will now change with government spending finally leveling off, and perhaps even start to recover, remains to be seen.  The budget compromise for fiscal years 2014 and 2015 reached by Senator Patty Murray and Congressman Paul Ryan in December, and passed by Congress in January, will reverse part of the impact of the budget sequester.  According to calculations by the Committee for a Responsible Federal Budget (fiscal hawks in favor of budget cuts), the agreement for FY2014 will lead to a small (1.8%) rise in nominal terms in budget authority compared to the FY2013 post-sequester levels.  This would still be flat to negative in real terms, based on inflation of about 2%.  And the FY2014 sum would still represent a 3.7% fall compared to what the FY2013 pre-sequester levels would have been.

Possibly more important would be government spending at the state and local level.  This was cut back as a result of the 2008 collapse and slow recovery, due to lower revenues and the requirement in many states and localities of a balanced budget.  While expenditures were still falling in 2013, revenues have started to grow (due to the positive, though still slow, recovery of GDP) and state and local budgets as a result can now start to recover as well.  But it also remains to be seen if that will happen.

This blog post will update the government spending figures during the Obama term through the fifth year of his administration.  And it will present the figures from a different perspective than before, by tracing the paths during the course of each presidential term (going back to Carter’s) relative to what the spending was at the start of their respective presidencies.

[Note that all the government spending figures used in this post will be in real, inflation-adjusted, terms.]

B.  Government Spending on Consumption and Investment

The graph at the top of this post shows the tracks of real government spending on consumption and investment during each presidential term going back to Carter, as a ratio to what it was at the start of their terms.  The base period is always taken as the last quarter before their inauguration (i.e. in the fourth quarter of the calendar year preceding their January 20 inauguration).  The data is computed from the figures in the standard National Income and Product Accounts (NIPA accounts, also commonly referred to as the GDP accounts) of the Bureau of Economic Analysis (BEA) of the US Department of Commerce, and are seasonally adjusted.  Note that all levels of government are included here – federal, state, and local.  We will examine below spending at the federal level only, as well as spending including transfer payments.

This government spending has fallen by 5 1/2% in real terms by the end of the fifth year (the 20th quarter) of Obama’s term in office.  It rose by 2 1/2% during Obama’s first year, which one might note is similar to the increases seen by that point under Carter, Reagan, and Bush I, and with a significantly greater increase by that point under Bush II.  Spending during Obama’s term has since been falling steadily, leading to the fiscal drag referred to above, to a point where it is now 8% lower in real terms than it was in his first year, or a net 5 1/2% fall from when he took office.

Yet Reagan and Bush II are seen as small government conservatives, while Obama is deemed by conservatives to be a big spending liberal.  The facts simply do not support this.

Government spending for the direct purchase of goods and services (used for consumption or investment), reviewed above, is a direct component of GDP demand.  When there are substantial unemployed resources (as now), such government spending will have a significant positive impact in spurring economic expansion.  As was discussed in an Econ 101 post on this blog, under such circumstances the fiscal multiplier will be positive and high.  Hence the fiscal drag from the cut-back in government spending during Obama’s term in office has kept the recovery below what it would have been.

But there is also government spending on transfers to households (such as for Social Security, food stamps, or unemployment insurance).  Such transfers are ultimately spent by households for their consumption of goods and services (or will in part be saved, including through the pay-down of debt such as mortgage debt).  It will enter into GDP demand by way of the spending of households for consumption, and the impact on GDP will depend on the behavior of households in deciding what share of those transfers they will spend or save.

Such spending rose more sharply during Obama’s first year in office, as he faced an economy in free fall as he was taking his inaugural oath:

The economy was losing 800,000 jobs per month at that time, pushing the unemployment roles up rapidly and plunging the incomes of many in the population to levels where they qualified for food stamps.  Government spending including transfers therefore rose by almost 9% by the third quarter of 2009, and reached a peak of 9.8% in the third quarter of 2010.  Since then, however, total government spending including transfers has been modestly falling, and is now 7 1/2% above where it was when Obama took office.

[Note all figures are in real terms.  The personal consumption expenditures deflator in the NIPA accounts was used to adjust transfer payments for inflation.]

Only during the Clinton period did one see a modestly smaller increase, of about 6 1/2%.  But there was a 16 1/2% increase in such spending at the same point in the term of Bush II, and an increase of over 22% under Reagan.  It was also higher by the end of their fourth years in office for both Carter and Bush I.

The differences are not small.

What matters to the economy when demand is inadequate and unemployment is high is spending at all levels of government.  Yet while we commonly blame the president in office for the performance of the economy, they at best can only influence the federal budget (and influence it only partially, as Congress decides on the budget).  Hence it may be of interest also to examine the paths of only federal government spending.

Such federal spending on direct consumption and investment at first rose during the Obama term, reaching a peak 8% increase in the third quarter of his second year in office.  It then fell sharply, to a point where it is now 5 1/2% below where it was when Obama took office: 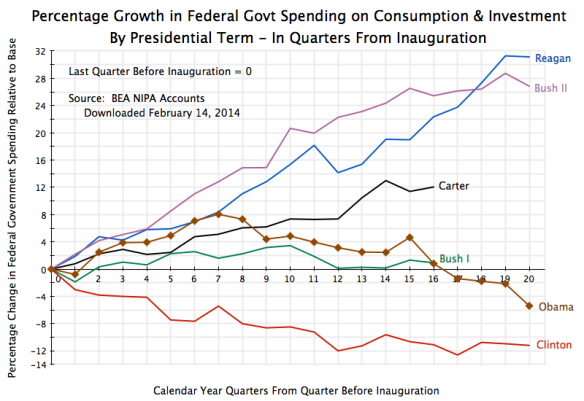 The initial increase in federal spending was in part due to the stimulus package that served to restart the economy (GDP was falling from 2008 through the first half of 2009; it then began to recover).  Note that while federal spending rose by 8% by the third quarter of 2010, overall government spending (including state and local) rose only by 2 1/2% at that point.  State and local government was cutting back, as they were forced to do by the balanced budget requirements of many of them, so federal spending and the stimulus it could provide was partially being offset by their cut-backs.

Republicans in Congress and conservatives generally continue to criticize Obama as being responsible for runaway government spending.  But after an initial modest increase in the first two years of his term, as he sought to stop the economic free fall he inherited on taking office (and succeeded), government spending has come down under any measure one takes.  The resulting fiscal drag has held back the economy, leading to an only slow recovery.  And the fiscal drag during Obama’s term in office is in sharp contrast to the large increases in government spending observed during the terms of George W. Bush and especially Ronald Reagan. Yet they have been viewed as small government conservatives.