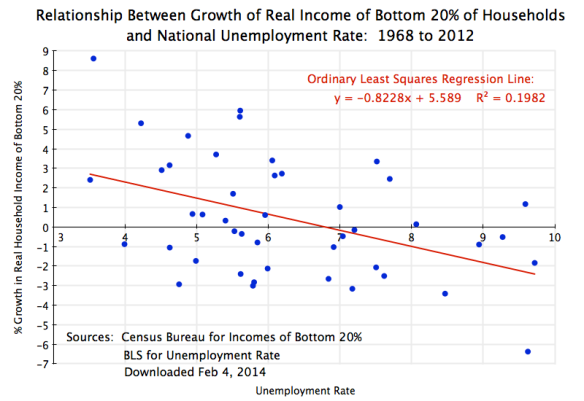 President Obama highlighted in this year’s State of the Union address, as well as in other recent speeches and events, the importance of and concerns about the worsening distribution of income in the US.  As this blog noted in a post two years ago, income distribution has worsened markedly in the US since about 1980, when Reagan was elected.  This deterioration since 1980 is in sharp contrast to the period from the end of World War II until 1980, when incomes of all groups in the US moved upward together.  The paths then diverged sharply after 1980, with large increases in the incomes of the rich (and in particular the extremely rich:  the top 1%, top 0.1%, and especially the top 0.01%), while the real incomes of the bottom 90% were flat or even falling.

An important question, of course, is what to do to achieve more equitable growth, and in particular more rapid growth in the real incomes of those in the lower strata of the population.  Much of the discussion has focussed on measures such as improving our educational and training systems, to prepare workers for better paying jobs.  There is no doubt that such measures are important, and need to be done.  Their impact will, however, only be over the long term – in a generation for measures such as improvements in the educational system.

This blog post will focus on a more immediate action that can be taken:  returning the economy to full employment and keeping it there.  We will find that based on historic patterns, slack in the labor market due to less than full employment has been negatively associated with growth in the real incomes of the bottom 20% of households.  Furthermore, based on statistical regression parameters estimated from the historical data, the greater degree of slack in the US labor market since 1980 compared to that in the thirty years before 1980, largely suffices in itself to account for the relative deterioration of real incomes since 1980 of the bottom 20% of households compared to the top 20%.

This is an important result.  Note that the claim is not that greater slack in the labor market (on average) in the decades since 1980 was the sole cause of the deterioration of relative incomes of the poorest 20% vs. the richest 20%.  There were undoubtedly numerous reasons for this.  But what the finding does indicate is that had the unemployment rate after 1980 matched what it had been in the three decades before 1980, this would have largely sufficed in itself to offset the other factors, and would have led to a rate of growth in the real incomes of the bottom 20% close to what it was for the top 20%.

B.  The Relationship Between Real Income Growth of the Bottom 20% and the Unemployment Rate

The scatter diagram at the top of this post shows the relationship between the annual real income growth of the bottom 20% of households since 1968, and the average rate of unemployment in the same year.  The income data for the bottom 20% comes from the series produced by the US Census Bureau, and measures household cash income before tax and from all cash sources (so it will include Social Security, for example, but not payments under Medicare).  The series starts in 1967 (so 1968 is the first year for which one can compute the growth), and goes to 2012.  The unemployment rate comes from the standard series produced by the US Bureau of Labor Statistics, where the annual rate is the simple average of the monthly rates over the year.

The regression fitted line slopes downward with a coefficient of -0.8228, indicating that on average, a 1% point increase in the unemployment rate in the year will be associated with a 0.8228% point fall in the growth rate that year of the real incomes of the bottom 20%.  The t-statistic on the 0.8228 slope coefficient is 3.3, where any t-statistic greater than about 2.0 is generally seen as statistically significant (with a greater than 95% degree of confidence).  That is, with a greater than 95% degree of confidence, the results suggest that the coefficient is significantly different from zero (where zero would indicate no relationship).

The R-squared of the regression (an indication of correlation) is relatively modest at just 0.1982.  It can vary from zero to one.  This indicates that there is more than just the unemployment rate that accounts for the annual change in the real incomes of the bottom 20%.  But this does not mean that the unemployment rate does not matter.  The t-statistic for it is highly significant.  Rather, the modest R-squared indicates there are other factors as well which have not been identified here.

C.  The Impact of Less Slack in the Labor Market

This is an interesting result.  It suggests that the higher unemployment rates we have on average suffered from since 1980 can account both for the stagnation of the real incomes of the bottom 20%, and the increasing inequality when comparing this group to the top 20%.  Note it does not offset all of the increasing inequality seen since Reagan was elected.  The real incomes of the top 1%, top 0.1%, and especially the top 0.01% have grown by far more than the incomes of the top 20%.  But keeping up with the top 20% would still be a major accomplishment.

A return to the economic performance that the US enjoyed in the three decades before Reagan would not be impossible.  To keep the average unemployment rate at the 5.17% rate achieved between 1950 and 1979 would not mean that all recessions need be avoided.  There were a number of recessions in the three decades before 1980.  But the recessions since 1980 (dating from January 1980 at the end of the Carter Administration, from July 1981 at the beginning of Reagan, from July 1990 during Bush I, from March 2001 at the beginning of Bush II and December 2007 at the end of Bush II) have been especially severe.  Avoiding those high peak rates of unemployment would have brought down the average.  Specifically, the average unemployment rate (based on the monthly figures) over 1980 to 2012 would have matched the 1950 to 1979 average if one would have been able to avoid those months since 1980 when the unemployment rate reached 6.4% or more.

There is increasing recognition that the rise in inequality in the decades since 1980, and the stagnation since then in the real incomes of those in the lower strata of the population, cannot go on.  But the solutions commonly proposed, such as better education and training, will take decades to have an impact.

The analysis in this post indicates that the more immediate action of bringing the economy back to full employment and then keeping it close to full employment, would have a major positive impact on the real incomes of those in the bottom 20% of households, and would lead to a more equitable distribution.  The analysis suggests that had the unemployment rate over 1980 to 2012 been at the level achieved over 1950 to 1979, then the rate of income growth of the bottom 20% since 1980 would have been similar to that of the top 20%.  The higher rate of unemployment since 1980, on average, may well explain why growth was broadly equal among income groups in the three decades before 1980, but not in the three decades since.

While there are many factors that underlie income growth and distributional changes, particularly for those at the very top of the income distribution (the top 1% and higher), the results suggest that getting the economy back to full employment should be seen as critically important and valuable.  And there is no mystery in how to do this:  As earlier posts on this blog have noted, the fiscal drag from government cutbacks since 2009 can fully explain why full employment has yet to be achieved in this recovery.  Had government been spending been allowed to grow simply at its historical average rate, the economy would already have returned to full employment by now.  Had government spending been allowed to grow at the higher rate it had under Reagan, the US would likely have been back at full employment in 2011 or early 2012.

Unemployment matters.  Not only is it a direct and personal tragedy for those who have lost a job because of the macro mismanagement of the economy, it is also a waste of resources for the economy.  The evidence reviewed in this post suggests further that the greater degree of slack in the US labor market since 1980 may well explain the stagnation of real incomes of the poorer strata of the population, and the widening degree of inequality of recent decades for those other than in the extreme upper strata.