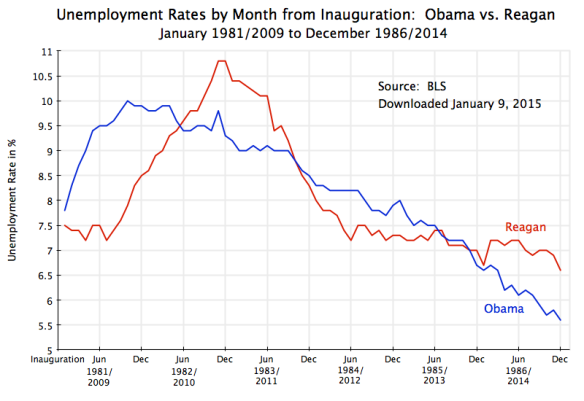 A.  The December Jobs Report

The Bureau of Labor Statistics released on Friday its regular monthly report on employment.  Job growth was once again strong.  Total jobs (nonfarm payroll employment, to be precise) rose by a solid 252,000 in December, and the unemployment rate came down to 5.6%.  Total jobs rose by an even higher (and upwardly revised) 353,000 in November and by an also upwardly revised 243,000 in October (the two most recent monthly figures are always preliminary and subject to revision).  These are all good numbers.  The 353,000 figure for job gains in November was the highest monthly figure in over nine years.

B.  Obama’s Performance on Unemployment, Compared to Reagan’s

While the pace of improvement has accelerated in the past year, the Obama record on jobs has in fact been a good deal better for some time than he has been given credit for.  Critics said that Obama’s policies, both as a consequence of the passage of the Obamacare health reforms and from his use of government regulatory powers, would (they asserted) constrain job growth and keep unemployment high.  These critics look to the Reagan presidency as a model, with the belief that there was a rapid fall in unemployment following his tax cuts, attacks on unions, and aggressive deregulatory actions.  This adulation continues.  A recent example was a column by Stephen Moore (Chief Economist of the Heritage Foundation) published in the Washington Post just two weeks ago (and which a number of commentators, including Paul Krugman, noted was full of errors).

But how do the Obama and Reagan records in fact compare?  The graph at the top of this post shows the path the rate of unemployment has taken during Obama’s presidency, and for the same period during Reagan’s presidency.  Both curves start from their respective inaugurations.

Unemployment under Reagan was high when he took office (at 7.5%), although on a downward trend.  But it then rose quickly (peaking at 10.8%) followed by a fall at a similar pace, before leveling off at a still high 7 to 7 1/2%.  It then fell only slowly for the next two and a half years, by a total of just 0.6% points.  The recovery in terms of the unemployment rate lacked strong staying power.

The pattern was different under Obama.  While unemployment was also high when he took office (7.8%), it was rising rapidly as the economy was losing 800,000 jobs a month.  It rose to a peak of 10.0% nine months later, before starting a fall that has continued to today.  The pace of the reduction was relatively steady over the years, but accelerated in 2014.  Over the last two and a half years, the unemployment rate has been reduced by 2.6% points, far better than the 0.6% reduction for the comparable period under Reagan.

As a result, the unemployment rate is now 5.6% under Obama, versus 6.6% at the same point in Reagan’s tenure.  By this measure, performance has been better under Obama than it was under Reagan.  The 5.6% rate under Obama can also be compared to Mitt Romney’s statement in 2012, during his presidential campaign, that adoption of his policies would bring the unemployment rate down to 6% by January 2017.  Romney viewed this as an ambitious goal, but achievable if one would follow the policies he advocated.  It was achieved under Obama already by September 2014.  One did not hear, however, any words of congratulations from Romney or others in the Republican Party to mark that success.

Of possibly more interest in the debate about the response to the respective policy regimes of Obama vs. Reagan, was the flattening out of unemployment under Reagan at the still high level of 7.5% or close to it in mid-1984.  If his “supply-side” policies were going to be effective in bringing down unemployment, this was the period when they should have been working.  The tax cuts had been passed, and the regulatory and other policies of the Reagan administration were being implemented and enforced.  But unemployment was trending down only slowly.  In contrast, unemployment was falling rapidly for the same period in the Obama presidency, with the pace of reduction indeed accelerating in 2014.  There is absolutely no evidence that Obamacare, actions to protect the consumer or the environment, the application of government regulations under Obama, or even “policy uncertainty” (a new criticism of Obama that was given prominence during the 2012 campaign), have acted to slow job growth.

1)  Why did unemployment rise rapidly from mid-1981 to late-1982 (to 10.8%), and then fall at almost the same rapid rate from that peak to mid-1984?  This had less to do with the policies of Reagan than of those of Paul Volcker, then Chairman of the Federal Reserve Board (and a Jimmy Carter appointee).  Volcker and the Fed raised interest rates sharply to bring down inflation, with the federal funds rate (the interest rate at which banks lend funds on deposit at the Fed to each other; it is the main policy target of the Fed) reaching over 19% at its peak.  Inflation came down, the Fed then reduced interest rates, and the economic downturn that the Fed policy had induced was then reversed.  Unemployment thus rose fast, and then fell fast.

3)  Why has the pace of improvement in the unemployment rate accelerated in 2014?  As earlier posts on this blog have noted,  Obama is the only president in recent history where government spending has been cut in a downturn.  The resulting fiscal drag pulled back the economy from the growth it would have achieved had government spending, and its resulting demand for goods and services and hence jobs to produce those goods and services, not been cut.

But this finally turned around in 2014.  Congress finally agreed to a budget deal with Obama, and state and local governments saw spending stabilize and then start to rise as the recovery got underway and boosted tax revenues.  The result is shown in this chart, copied from an earlier post whose focus was on austerity policies in Europe:

Total US government expenditures (federal, state, and local; in real terms; and for all purposes, including both direct purchases of goods and services and for transfers to households such as for Social Security and Medicare), turned around in the first quarter of 2014 and began to rise.  Government spending had previously been falling from mid-2010.  With that turnaround in government spending, GDP rose by 4.6% (at an annualized rate) in the second quarter of 2014 and by 5.0% in the third quarter.  Much more was going on, of course, and one cannot attribute all moves in GDP growth to what has happened to government spending.  But the turnaround in government spending meant that this component of GDP stopped acting as the drag on growth that it had been before.

Jobs then grew in 2014 at the most rapid rate since 1999, and unemployment fell.  The unemployment rate of 5.6% is the lowest since 2008, the year the economy entered into the economic collapse that marked the end of the Bush administration.

D.  How Much Further Does Unemployment Need to Fall to Reach Full Employment?

The 5.6% rate is not yet full employment.  While it might appear to some to be a contradiction in terms, there will always be some unemployment in an economy, even at “full employment”.  There will be frictions as workers enter and leave jobs, mismatches in skills and in geographic location, and so on.  But the 5.6% rate is still well above this.

Based on such historical measures, the unemployment rate could still be reduced substantially from where it is now before the labor market would be so tight as to cause problems.  Economists debate what that rate might be at any given time, but personally I would say that a reasonable target would be no higher than 4 1/2%, and perhaps as low as 4%.

But rather than try to predict what the full employment rate of unemployment might be, one can follow a more operational approach of continuing to push down the rate of unemployment until one sees whether upward wage and price pressures have developed and become excessive.  That is how the Fed operates and determines what policy stance to take on interest rates.  And there is absolutely no sign whatsoever that there is such upward wage or price pressure currently, with the unemployment rate of 5.6%.

As a number of the news reports on the December BLS employment report noted, while unemployment has come down, estimated hourly earnings in December also fell by 5 cents from the previous month (to $24.57 for all private non-farm jobs, from $24.62 the previous month).  Such a one-month change is not really significant, and could be due to statistical fluctuations (as the data comes from a survey of business establishments).  But what is significant is that average hourly earnings in recent years have only kept pace with low inflation of less than 2% a year.  In real terms, wages today are almost exactly the same as they were in late 2008.  This has been the case even though labor productivity is about 10% higher now than in late 2008 (this figure is an estimate, as the GDP figures for the fourth quarter of 2014 have not yet been reported).  In a properly functioning labor market, real wage growth will be similar to labor productivity growth.  But high unemployment since the 2008 downturn has weakened labor’s bargaining position, leaving real wages flat.

Government policy, including actions by the Fed, should be to keep the expansion going at as fast a pace as possible until unemployment has fallen so low that one sees upward pressures on wages and hence prices.  As I noted above, I would not expect to see that until the unemployment rate falls below 4 1/2%, and quite possibly below 4%.