Trump and his administration have utterly mismanaged the Covid-19 pandemic.  The direct result of this ineptitude has been tens of thousands more Americans dying (already) than would have been the case had the US managed the pandemic as well as any of the developed countries of the Asia and Pacific region.  The difference is not small.  This is also not a calculation comparing what the US did to what theoretically might have been possible.  Rather, it is a comparison to what these seven countries actually achieved, facing the same virus as the US.

The chart above shows the cumulative number of deaths from Covid-19 for the US and for seven Asian/Pacific countries between March 1 and April 25, with the numbers all scaled, for comparability, to what they would have been at the US population level.  The data comes from that assembled on an on-going basis by Johns Hopkins University, where a description is available here, and the country data itself available here.  The country population figures to work out the rates per million are those reported by the UN.

US deaths from the virus totaled 53,755 as of April 25.  The figures for each of the seven Asian/Pacific countries are, at this scale, all scrunched up at the bottom of the chart and are almost indistinguishable.  Each and every one has done far better than the US.

Focusing on the figures for April 25 only, one has: 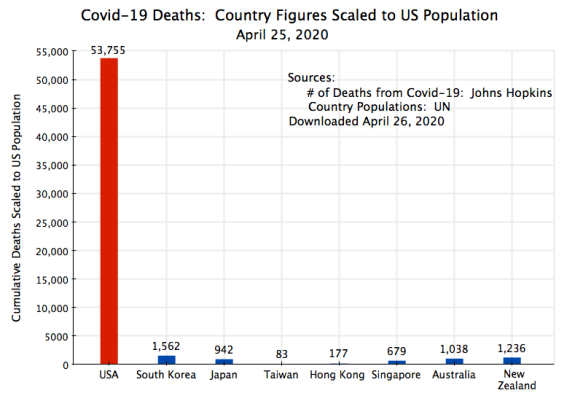 US fatalities from Covid-19 have also just passed another significant milestone.  As of April 25 they now exceed the total number of US deaths in combat during World War I:

Yet Trump continues to assert that he and his administration have done a superb job of managing this crisis.  If there are any issues, he has at various times asserted the blame is with China, the Chinese President Xi Jinping (whom he, at other times, lauded), the WHO, Obama, Hillary Clinton, Democratic mayors, Democratic governors, Democrats in Congress and the Senate, Democrats more generally, the news media, government civil servants (the “deep state”), and others.

But not himself.  What can he be faulted for?  David Frum (a longtime self-described “conservative Republican” who served as a speechwriter for George W. Bush, but who is now very much a critic of Trump) puts it well in an April 7 article in The Atlantic.  I will quote it at length:

“That the pandemic occurred is not Trump’s fault. The utter unpreparedness of the United States for a pandemic is Trump’s fault. The loss of stockpiled respirators to breakage because the federal government let maintenance contracts lapse in 2018 is Trump’s fault. The failure to store sufficient protective medical gear in the national arsenal is Trump’s fault. That states are bidding against other states for equipment, paying many multiples of the precrisis price for ventilators, is Trump’s fault. Air travelers summoned home and forced to stand for hours in dense airport crowds alongside infected people? That was Trump’s fault too. Ten weeks of insisting that the coronavirus is a harmless flu that would miraculously go away on its own? Trump’s fault again. The refusal of red-state governors to act promptly, the failure to close Florida and Gulf Coast beaches until late March? That fault is more widely shared, but again, responsibility rests with Trump: He could have stopped it, and he did not.

The lying about the coronavirus by hosts on Fox News and conservative talk radio is Trump’s fault: They did it to protect him. The false hope of instant cures and nonexistent vaccines is Trump’s fault, because he told those lies to cover up his failure to act in time. The severity of the economic crisis is Trump’s fault; things would have been less bad if he had acted faster instead of sending out his chief economic adviser and his son Eric to assure Americans that the first stock-market dips were buying opportunities. The firing of a Navy captain for speaking truthfully about the virus’s threat to his crew? Trump’s fault. The fact that so many key government jobs were either empty or filled by mediocrities? Trump’s fault. The insertion of Trump’s arrogant and incompetent son-in-law as commander in chief of the national medical supply chain? Trump’s fault.

For three years, Trump has blathered and bluffed and bullied his way through an office for which he is utterly inadequate. But sooner or later, every president must face a supreme test, a test that cannot be evaded by blather and bluff and bullying. That test has overwhelmed Trump.”

Since April 7 one could add much more to this list, most recently Trump’s comments at his April 23 press briefing on the possible curative effects of injecting disinfectants into the body.  Health professionals around the country scrambled to warn the public not to do this – it could be deadly – and Trump is responsible for this confusion.  Or the ousting in the last week of Dr. Rick Bright, a highly respected medical researcher with a career on vaccine development, who as the head of BARDA (the Biomedical Advanced Research and Development Authority) had a lead role in the urgent development of a vaccine for Covid-19.  The ousting of such an official in the middle of a pandemic is astonishing for any reason.  Dr. Bright, in a statement issued through his lawyers, said it was because he had resisted administration pressure to promote the anti-malarial drugs chloroquine and hydroxychloroquine that Trump had repeatedly touted, even though there was no good evidence of their efficacy.  Indeed, a recent study found that hydroxychloroquine significantly increased the number of deaths of Covid-19 patients compared to those given the usual care.

Trump, however, is unwilling to take responsibility for these repeated failures.  In a March 13 press briefing he famously said “I don’t take responsibility at all” (where this was with specific reference to the lack of adequate testing in the US for a critical two months).  Rather, it was someone else’s fault.