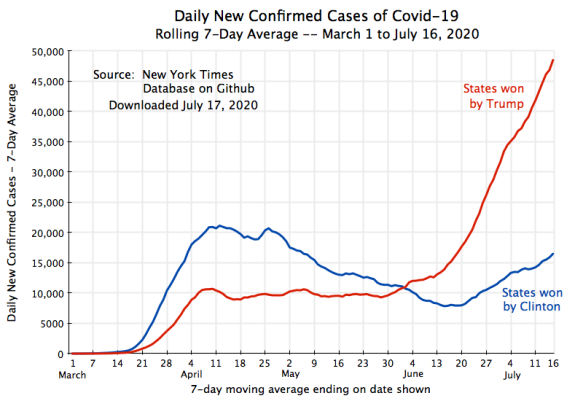 An earlier post on this blog compared the spread of Covid-19 in the states that Trump had won in 2016 to that in the states won by Clinton, with data through June 24.  This post will update those figures to July 16.  The trends have become even clearer.

As seen in the chart above, new cases in the states won by Trump have continued to shoot upwards, at an alarming pace.  They had reached 22,000 new cases per day as of June 24 (based on a seven-day rolling average ending on that date), but have now (as of July 16, just three weeks later) more than doubled to 48,500.  The decisions to rapidly reopen by the governors of such Trump-won states as Florida, Georgia, Texas, and Arizona, as well as others, have clearly been a disaster.  The virus is now spreading rapidly in those states, and some of these governors are now putting back in place (albeit only partially) the social distancing measures that had earlier worked.

The trends in the figures for the number of deaths from Covid-19 have also now become clear:

In the previous data through June 24, the daily number of deaths (again based on seven-day rolling averages) had come down from their mid-April peaks to a relatively flat level as of mid-June.  This had marked a sharp decline of over 80% in the daily number of deaths in the Clinton states (where peaks early in the crisis in New York had overwhelmed the hospital system, at a time when still little was known on how best to treat the extremely sick), and by a lesser but still significant decline (about 50%) in the Trump states.

Since mid-June, the daily number of deaths in the Clinton states has been relatively flat (hovering between about 200 and 300).  But there has now been a significant increase in deaths in the Trump states, rising from a trough of about 280 per day to now almost 500, an increase of about 75%.  And the path points to a continued rise, as one would expect given the even sharper rise in daily new cases (as there is a lag – deaths occur several weeks after when a case is first confirmed).

These trends should be worrisome in the extreme.  They are not the consequence of increased testing in the US, as Trump has repeatedly asserted.  While testing was slow to start in the US (the administration had bungled the roll-out in February and into much of March), there has not been a significant change in test availability since mid or late April, and certainly since May.  The increases in cases started in June.  More people are now being tested because more people are getting sick, and seek a test as they come down with the symptoms.  And the increase in the number of people dying from the disease is certainly not a consequence of testing, but rather of more people becoming sick.

More could be done, but sadly this presidential administration isn’t.  And it would not be all that difficult.  As I had noted in my June 25 post, a relatively easy measure would be for everyone to wear masks.  Since that post, Robert Redfield (the head of the CDC) noted in an interview on July 14 that “if we could get everyone to wear a mask right now, I really do think that over the next four-six-eight weeks we could bring this epidemic under control” (see this YouTube video of the interview, starting at about the 4-minute mark).  He noted that this is not difficult – the problem is just that not enough people do it.

For many of those refusing to wear a mask – some adamantly so – the issue is seen as political.  The problem started with Trump, where at the April 3 press conference announcing CDC guidelines calling on people to wear face masks, Trump simultaneously emphasized that he would not himself abide by those guidelines.  With any other president, this would be unbelievable.  Since then, supporters of Trump have increasingly seen the issue as one of making a political statement rather than as the public health matter that it is.  A recent academic study found that political partisanship is the most important factor in explaining whether or not people will wear masks and exercise other social distancing recommendations, and that this partisan difference has grown over time.

This has even become violent.  In early May, for example, a security guard at a Famlly Dollar store told a customer she would need to wear a face mask to enter, as per the state orders of the time.  She returned with members of her family about 20 minutes later who shot the guard, who died.  More recently, a 43-year old man entering a convenience store without a mask was asked by another customer to put on a mask.  He responded by stabbing the 77-year old customer.  The man then fled, was later spotted by police, and started to attack the policewoman who then shot him.  He died.  And there have been, sadly, a number of such incidents.

Those refusing to wear face masks when in public insist that such a requirement infringes on their “freedom”.  Thus, as a matter of principle, they refuse to do it.  If it was indeed the case that the only one suffering harm from not wearing a mask was that individual only, I would not be so concerned.  But that is not the case – others exposed may then become infected, and possibly even die.  It is similar to speed limits on highways.  If the only one who might be harmed by speeding is the speeder only, I would not be so concerned.  But speeders may harm, and possibly kill, others as well.  Hence we have speed limits and those limits are enforced.

Refusing to wear a face mask under a belief that it is an infringement on freedom, and responding with threats or even violence when asked to do so, is madness.  With true leadership in Washington we would have a president who would act on this.  Not only would that president model responsible behavior by wearing a face mask himself when in public or when meeting with others, he would also call on all his supporters to do so as well.  They might listen to him.  But his refusal to do so speaks volumes itself.