A Republican theme in this Presidential campaign, asserted repeatedly by Mitt Romney and other Republican leaders, is that a sharp expansion of government under Barack Obama is the cause of the weak job growth in the recovery from the 2008 collapse.  Romney laid out this theme most clearly in his policy address on economic issues last March (see here for a transcript).  I noted in this blog entry that the address was confused and full of factual errors, but it does represent what Romney said he believes.  More recently, in remarks in Iowa earlier this month, Romney said of Obama that, “he wants another stimulus, he wants to hire more government workers.  He says we need more fireman, more policeman, more teachers.  Did he not get the message of Wisconsin?  The American people did.  It’s time for us to cut back on government and help the American people.”

As I have noted in a number of entries in this blog, government has in fact been contracting rather than expanding during this economic recovery, and that indeed the resulting fiscal drag can account for the weakness of the recovery.  See, for example, the posts on fiscal drag during the recession (here and here); the reduction in total government employment (including state and local) during the period Obama has been in office (here and here), with federal government employment flat and non-defense federal employment falling (here); and on federal government spending that has in fact been close to flat during the Obama term, in contrast to the sharp increases under recent Republicans (here).

Given the importance and centrality of this issue in the weak recovery, it is important to get the facts right.  While the previous blogs have looked at the relationship of government spending in recent US economic downturns to the pace of recovery of GDP, they have not explicitly examined the assertion Romney and his Republican colleagues have now raised that higher government employment accounts for the slow recovery in jobs.

This can be done quickly, through a series of graphs.  The analysis here complements and extends the earlier blog post on fiscal drag as the principal cause of the weak recovery from the 2008 collapse, and the blog post on the path of employment during these downturns.

First, total employment (both public and private) has fallen more in the current downturn than in any other in the US over the last four decades, and the recovery once it bottomed out has been relatively weak:

Total employment was falling at a rapid rate when Obama took office (and at that point, had fallen by more than had been the case in any other US downturn of the last four decades).  Actions taken by Obama at the start of his administration (as well as aggressive actions by the Fed) started right away to bend this curve, and within a year it had bottomed out.  Since then there has been positive and remarkably steady employment growth, but at too slow a pace given the depth to which employment had fallen to make up for the initial decline.  The path has been the weakest seen in any of the recoveries from the downturns the US has faced over the last four decades.

(Note:  The figure above, and the ones below on employment, go out for 18 quarters.  This carries the data to the second quarter for 2012 for the downturn that began in December 2007.  The employment figures are the averages for the periods, and the June 2012 figure, not yet published by the BLS, was estimated based on the April and May figures.)

The graph for total private employment is similar, although with a somewhat stronger fall initially, until it bottoms out following the measures early in Obama’s term, and then a somewhat stronger recovery.  Private employment is now above where it was when Obama took office, but it still has not made up for the sharp fall in the last year of the Bush administration: 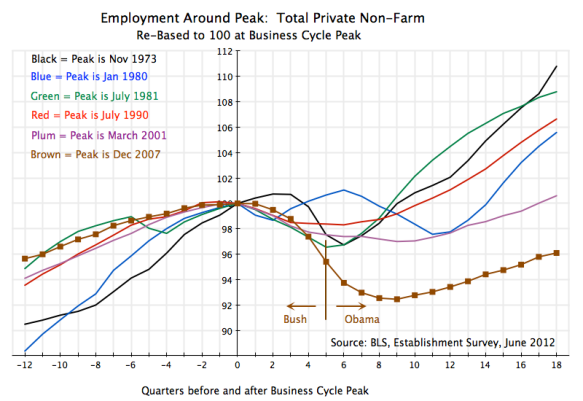 In contrast, total government employment (including state and local, as well as federal) has followed a different pattern.  In contrast to private employment, it did not fall initially (during the last year of the Bush administration).  But once Obama took office, it has fallen steadily except for the temporary blip seen in the 10th quarter after the onset of the downturn, due to the temporary hiring for the decennial census in the Spring of 2010:

The fall in government employment was particularly sharp once Obama took office, as can be seen more clearly in a graph which re-bases the data to equal 100 in the fifth quarter following the business cycle peak: 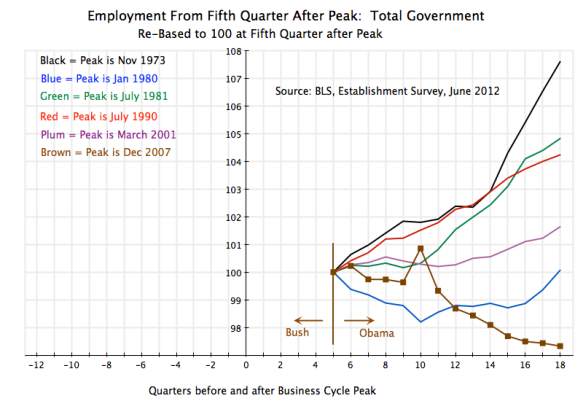 In no other downturn has the US had such a cut-back in government employment.  Yet Romney and his Republican colleagues are arguing for even greater cut-backs, including for firemen, policemen, and teachers, as Romney stated in the quotation copied above.

Looking closely at the two graphs above on government employment, one might note that while the reductions in government employment were greater under Obama and in the most recent downturn than in any other, the second smallest was in the recovery following the January 1980 downturn.  This period was initially under Carter (for four quarters) and then under Reagan.  Since I have noted before in this blog that had government grown under Obama at the pace seen under Reagan, the economy would now be at close to full employment, is there a contradiction here?

The answer is no.  First, one should note that the “recovery” from the January 1980 downturn merges into that from the July 1981 downturn (but leading by six quarters), as the economy went into a new recession a half year after Reagan took office.  Reagan did cut back on government employment initially, before allowing it to grow.  Hence the paths followed by the green (July 1981) lines in the graphs above are more directly related to Reagan’s policies than those indicated by the blue (January 1980) lines.

Second and more fundamentally, the importance of the government sector to the economy and its recovery is more related to overall government expenditures than to simply the number of government employees.  Romney and his Republican colleagues are simply missing this point when they focus their criticisms on the number of government workers.  Reagan expanded government spending, but the focus was on things like defense expenditures rather than the number of school teachers.  Defense expenditures are done under contract to private companies (much of it to a few giant companies such as Boeing and Lockheed).  Building modern jet fighters and naval ships can be very labor intensive, but these are employees of private contractors, and are not directly classified as government workers.

The paths can be seen in the following graphs, similar to ones presented in the earlier blog, but now with 17 quarters shown rather than 16 (as there is now one quarter of additional GDP data available): 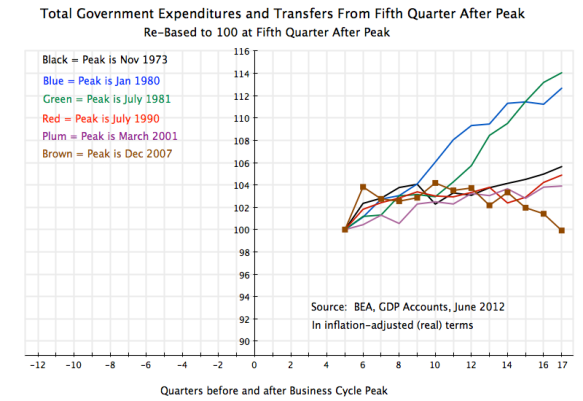 Growth in government spending during the Reagan periods (the blue and green paths) is the highest of all, especially when one starts five quarters from the cyclical peaks (when Obama took office).

In summary, if there was any basis for the belief of Romney and his Republican colleagues that cut-backs in government employment and spending would lead to strong growth, then the economy would be booming right now.  Government employment and spending in the current downturn, especially once Obama took office in January 2009, have been below the paths followed in each of the other downturns the US has faced over the last four decades.

The cause of this weak recovery is not that government has grown rapidly, but rather that is hasn’t.