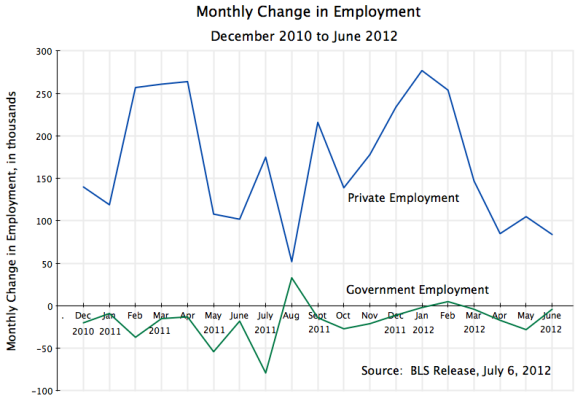 Total (private and government) job growth was an estimated 80,000 in May, about the same as a revised 77,000 total in May.  But as was indicated in my June 1 posting on this blog on the May jobs report, the US labor force is growing at a rate of about 83,000 per month (based on the average growth over the last 10 years, so as to get away from the month to month fluctuations).  Hence no progress is being made on reducing the number of unemployed, and the reported unemployment rate (based on the separate Household survey; the jobs numbers come from an survey of Establishments) was unchanged at the still high 8.2%.

None of this is good for the economy, nor for Obama’s re-election prospects.  But while Romney and his Republican colleagues will reiterate their strong criticism of Obama’s policies, asserting that an explosion of government under Obama is the cause of this poorly performing job market, their arguments are simply inconsistent with the facts.  Government jobs (primarily at the state and local level) have indeed contracted sharply during the period Obama has been in office.

It is instructive to compare job growth during the Obama period to that of Bush, Jr., during his first term:

Jobs in the private sector are now slightly higher, by 160,000, than when Obama took office in January 2009.  The recovery from the free-fall in jobs that was underway when Obama was sworn in is now complete, although there is still a long ways to go to catch up with what would have been normal growth during this period.

In contrast, at the same point in Bush’s first term there were almost 1.8 million fewer private jobs than when he took office.  Yet while Romney harshly criticizes job performance under Obama, he praises the policies under Bush.

And there is a sharp contrast not only in private job growth but also in growth in the number of government jobs.  Since Obama took office, 633,000 government jobs (primarily state and local) have been cut.  In contrast, for the similar period during the Bush first term, government added 766,000 employees.

Had government jobs followed the same path under Obama as it had under Bush, there would now be 1.4 million more workers in the public sector.  1.4 million more workers employed would, by itself, have brought down the overall unemployment rate from 8.2% to 7.3%.  But there would also be multiplier effects in an economy with its still high unemployment, as the newly employed school teachers, policemen, firemen, and other public workers spend their earnings in their communities.  Assuming a conservative multiplier of just two (that is, one newly employed additional worker for each newly employed public worker; many economists would estimate the multiplier is in fact higher than two in conditions of high unemployment), the overall unemployment rate would be only 6.4%.  The economy would be approaching full employment, which is normally taken to be unemployment in the 5 to 6% range.

The scaling back of government has been devastating for the job market during the period Obama has been in office.  Yet through repetition, the common view is that government has exploded during Obama’s term.