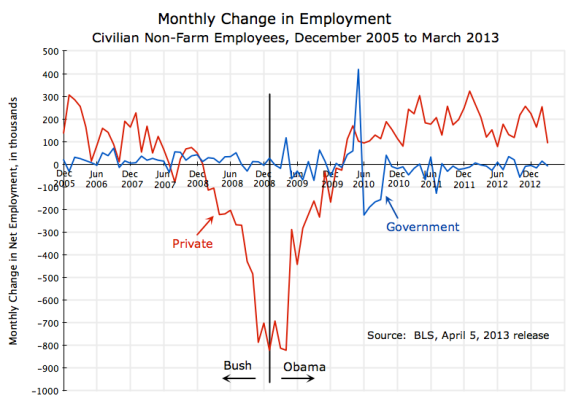 The Bureau of Labor Statistics released this morning its regular monthly report on employment.  Growth in jobs in March was disappointingly low, at just 88,000 net new jobs created.  The expectation among analysts (averaging across all their forecasts) prior to the report coming out was that 193,000 net new jobs had been created in March.  Private sector job growth in the BLS figures was just 95,000, while government once again brought down job growth with a cut of 7,000 public sector jobs.  While one should not read too much in one month’s report, and it follows a fairly good February report, the slow-down in March appears to indicate that the recent signs of improvement (including that February jobs report) are being undermined by the decisions being made in Washington on government spending.

The worst of the government cut-backs are yet to come.  The sequester, under which $85 billion in spending authority in the remainder of fiscal year 2013 has been cut (roughly 1% of GDP over this seven month period), only entered into effect on March 1.  It appears that most of the cuts will be enforced through mandatory furloughs, where government workers will be forced not to come to work for a certain number of days (varying by agency) and then not be paid for those days.  These furloughs will only start in April, as a 30 day notice is required.  The furloughed workers will not show up directly in the unemployment statistics, but with their resulting lower incomes (about 5% on average it appears) they will have less to spend in this still weak economy, thus depressing demand and private jobs.  We will see how this works out over the coming months.

There are in fact some early signs of the sequester having an adverse impact on the private sector.  For example, in the past week, both Delta Air Lines and then US Airways announced that their March revenues were weak, which they attributed at least in part to the sequester (leading not only to less travel by government workers, but also and more importantly, less travel by government contractors).  But it is still early.  And since the impact on the GDP numbers will not become significant until the second quarter, we will not know until July (when the initial GDP estimate is published) what the impact on GDP growth has been.

The BLS jobs report also reported that the unemployment rate had fallen to 7.6% from the previous 7.7%.  However, this was more than entirely due to the estimate that the number of workers in the labor force had declined by almost a half million.  The unemployment figures are obtained from a survey of households, while the figures on net new jobs created are from a separate survey of business establishments (along with government and non-profit entities).  There is more volatility in the figures from the household survey, as the effective sample size is a good deal less (each household surveyed will generally have only one or two household members in the labor force, while a business establishment can have thousands of workers).

Thus the published figures from the household survey from a single month are viewed with caution.  It is not clear why the estimated population in the labor force would have fallen by a half million in a single month, and analysts will want to see whether this holds up in coming months.  And while also figures from just one month, it is still disconcerting that the household survey estimated that the number of people with jobs actually fell by 290,000 in the month (while the number of unemployed fell by close to 210,000, with these two numbers together adding up to the half million fewer household members in the labor force).

The March jobs report was not a good one.  And with government cutbacks due to the sequester now becoming greater, there is reason to be concerned that the picture will become even worse in coming months.